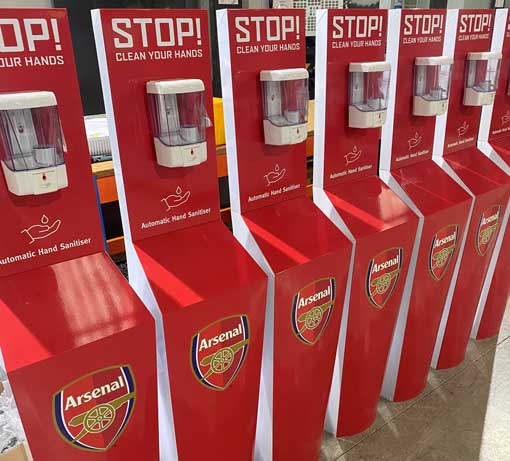 Cube Management continues to deliver its ‘Don’t Pass It On’ hand sanitiser station solution as sports events and venues prepare to re-open and focus on their first events.

With the Premier League due to restart on 17th June, though under strict limits on those allowed into stadiums and grounds on matchdays, Cube Management has, once again, been busy manufacturing its hand sanitiser stations for the sports industry. New units will be deployed at various clubs throughout the rest of the season, including 10 stations at Arsenal FC.

The Premier League, suspended on the 13 March because of the pandemic, will resume on Wednesday when Manchester City host Arsenal and Aston Villa host Sheffield United.

A minute’s silence to remember those who have died with coronavirus will also be held, before the opening two fixtures and during the first full round of games the next weekend. In addition, heart-shaped badges in tribute to frontline NHS staff will be worn on kits.

Meanwhile, England Cricket will be playing a three-Test series against the West Indies in July. The series, originally due to begin on 4th June, will start on the 8th July and will be played at bio-secure venues without spectators.

The West Indies team, who have recently arrived in the UK and entered quarantine at Emirates Old Trafford where they will spend three weeks preparing for the series, will be heading to the Ageas Bowl in Southampton for the first Test. The second and third matches will take place at Old Trafford.

Cube Management’s hand sanitiser stations will be deployed at both venues, having delivered 100 units to Manchester and 80 units to Southampton.

ABOUT CUBE’S HAND SANITISER INITIATIVE
Cube’s Don’t Pass It On hand sanitiser stations were initially designed for the events industry, pre Covid-19 UK lockdown, to provide sports venues with a simple method to support hand sanitation for visitors and staff in order to try and help mitigate the spread of Coronavirus.

Tried and tested at Twickenham Stadium at the Six Nations Championships and for the Jockey Club during the Cheltenham Festival, the units have since been deployed across the UK at hospitals, airports, supermarkets, and other public service facilities and high traffic locations.

Manufactured to order in the UK, the portable stations are designed to offer a highly visible public health communication to encourage engagement and provide an effective means of cleaning hands and reducing the spread of Covid-19.